Facebook won’t let me in; as when Google decided I was spam, there are things that purport to “help” me…but always end up landing me on a page that says ‘that didn’t work. We’re trying really hard to fix it” — in other words, we have no algorithm to fix this — and it’s exactly the message a person would get that had been kicked off.   Reckon I’ll wander over to bikejournal.com and let ’em know why I’ve disappeared…

Bicycles are everywhere — when I went to the UC2B demo Thursday after work, people who were at the same gathering I was came out and got on their bikes to go home.   THat’s a first.  Saw one fellow making left turn in the dark from Lincoln to … ???   … — hopefully he was on his way to “Light the Night” to get one of the free lights.

Had several new “never heard of you until” people at TBP today, donating or buying bikes.  It wasn’t *too* busy, though, so… more pics 🙂 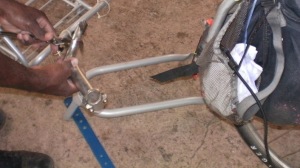 bikestem in lieu of fork?

So, if we can’t put the fork up on the axle… how about attaching the trailer to a handlebar stem instead?  It’s designed to withstand the same forces. 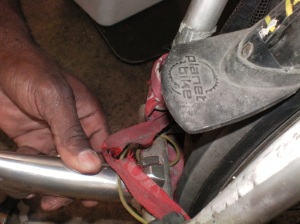 Alas, there isn't enough space between Xtracycle part and tire.

Major bummer — the tire was simply too close.  The stem did not fit.

But wait! We have other stems!   (We tried bar ends, too, and explored things sticking out of the sides of the Xtracycle parts — but you can’t go *through* that thing,k there’s a big fat nut inthe way.)

If at first you don't succeed, pry pry again!

a different stem… one that needed to be pried open so it would go around that round thingy.  SUCCESS!

Except… oops… Carl points out the Driveway Fail Factor.  The stem will let it ride around and side to side,k but not up and down. 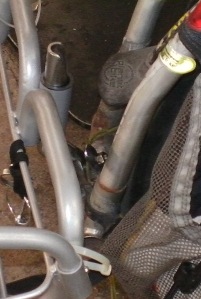 Oops, I don’t think that was that one 😉   That was the driveway fail inspirer… 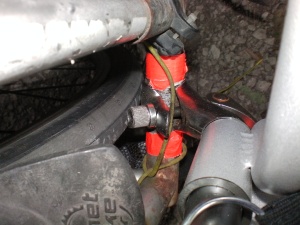 Okay, this was the actual, eventual genuine Driveway Fail.   You can see the quick release valve — that was installed so that when the trailer was on, it would be loose, so the trailer could go up and down as well as back and forth.  When it’s off, I can snug up the quick release so things aren’t catching on the tire.

Oops, only one problem:    going up the driveway is enough vertical motion to move the big ol’ nut around to where … it nails that puir little tire.

This entry was posted in Uncategorized. Bookmark the permalink.