One of the amusements of days off is getting out as far as the sidewalk and laying a shovel to the pavement.  My shovel has its corners well bent in. Part of the enjoyment is the pure irony and connection to sisyphus.  I shoveled Tuesday, knowing that the real snow hadn’t gotten there. I shoveled Wednesday, knowing that it was completely pointless because my little clear spot is a teeny island… not actually *useful,* but people can see I tried.

I rode on the inside bike last night and got on the bus this a.m. My phone died — teh “new” one — took it two days to have the same “no charge! low battery! powering down!” symptoms. So I asked the site which bus would get me to Sprint after work, and rode that Grey all the way from Parkland. Had the bus to myself after Lincoln Square. Hopped off at teh corner to experience Pedestrian Snow 101.  It is a good thing to be young and strong, it’s a good thing, we’re not old for long, it’s a good thing that making love is fun… oops, I digress, Jesse Winchester… ( http://www.youtube.com/watch?v=SQ5Ho6_XkZc ) … I had misread where the bus stop was and the young thing navigating the plowages around me while I took pictures thought the closest stop was Lincoln Square… I got there with a five minute wait for the Greenhopper.  Two minutes, I might have, but… it was such a nice night and a good 12 degrees or so, so I hoofed it home and snapped along the way. To wit:

Such a nicely painted crosswalk!   INto the drifts, of course… 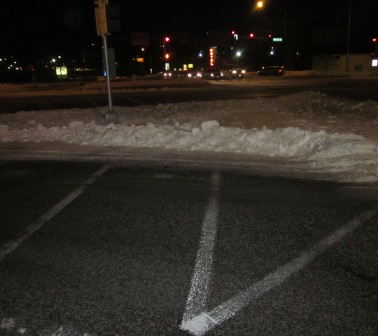 Clearly pedestrians are a priority…snork…

Just press that “walk!” button.  At least the ice is hard enough to support most folks, if a little slippery… 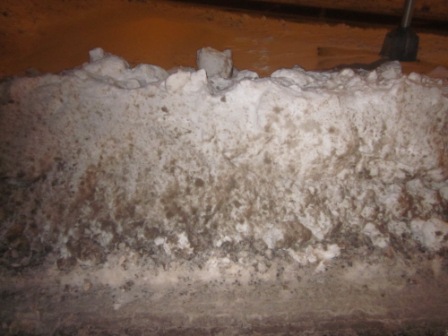 No. Really. We’re REALLY almost there. Well, across the street, anyway.

As noted, the ice pretty much supports ya, so just skate along! 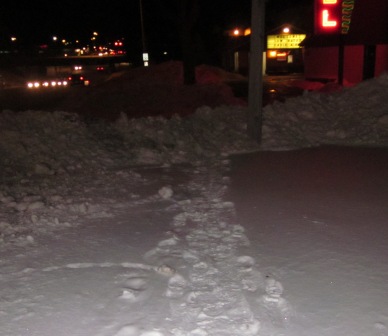 Many have trudged this walk before me… (how many land in the ER?)

Let me use your steps as a ladder… yes, it’s pretty floggin’ TALL!

And I’m supposed to be sure to shovel my sidewalk, eh?   I decided to jog under the bridge on the road between the light cycles, since I really didn’t know whether there was a pedestrian path underneath all that. Looking back afterward, I discerned from the many footprints of the pedestrians forced to go there that yes, there was.  (It was about 6:30 p.m. so I had ample time between light cycles to cut through.  I also had turned on my blinky on my backpack.)

I did turn right to the quieter roads … behind the stuff of courthouses where… well, there *is* a sidewalk underneath this stuff, but clearly they didn’t even try to clear that.   I really didn’t want further walking on VIne,  though.  The sidewalks *were* clear at the end and I turned left to go up Broadway and to Lincoln Square (to decide not to wait for the bus), cut through the mall and out to where the sidewalks *were* cleared.    To wit:

Note the rather very, very shiny reflections.  This was slipperier than the plowage debris; this was ice.  I got to practice my penguin walk.

Again, it is SO important to do your part!   Plow your walk… this wasn’t quite as slick as the previous, but I’m not sure the unpredictability wasn’t every bit as likely to land me with a fall. And, of course… there’s no  where to go when you hit the drifts. 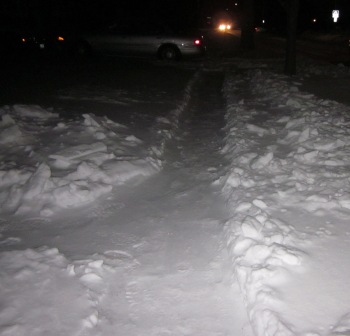 Back on Vine Street, where a snowblower had been 🙂

I had crossed to the left side  just so the silly bus driver wouldn’t think I wanted to get on 🙂 I wish this were uphill, I haven’t breathed hard all day…   Here is yet one more little example of the contrast of the “cleared walk” to the Mountains of Crap Left By The Plow.  I turned left on Washington – that house on the corner had cleared the walks, I believe. (That bus five minutes behind me went by about then.)

Yea, verily, it is so important to clear your walk.  Of course, I still have to clamber over that plowage… 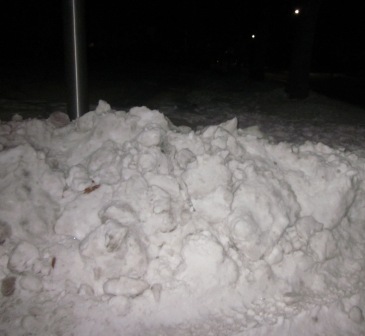 and this…  dear Safe Walks to School people, don’t implore me to shovel my walk for the sake of  the children SHORTER THAN THIS mess left by the plows.

On Vine, I also went by a fellow digging out his van from a driveway.  He was a mused… hey, had this been snow, he wouldn’t have been stuck, but he’d just come by to check on his property. He told me to be careful walking —  and at that point it registered in my mind that this property owner didn’t clear that driveway… or his walk… and I mused aloud about the concept of responsible property ownership and mused even louder at the next plot where “here’s a property owner who cleared a path!”

and yet one more little example of wonderful, clear sidewalk… so I can break my neck at the end.

And finally, yes, there was this one driveway that had been plowed and the driveway plowage dumped right into the pedestrian pathway.  Hey, what are those awful walking people doing crossing my driveway?  Had there not been people in their cagemobiles in that driveway, I would have boot-scooted a fair amount of that stuff back on to their cute little driveway. Hey, at least it was only one.

I’ll take the bus again tomorrow. Today was seriously frigid and the roads really are full of ice still — but I am cautioned  at how easily my mind forgets the thrill of being IN the weather and wants to avoid it. I might just bring my helmet since my Dahon is under my desk.

This entry was posted in weather. Bookmark the permalink.