… here’s from the coop list,,, a picture of the sidewalk where the kid got trapped under the SUV — he’ll be in hospital for another *week* … sounds like burns and bones and scars… Can we say NEED SOME INFRASTRUCTURE CHANGE???? 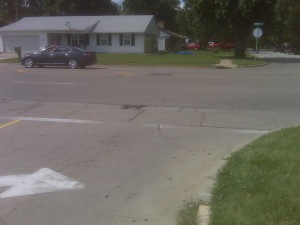 There were other pictures that sort of almost conveyed how blind a situation this was for cyclist and driver.  YES, we need to be more aware of these things… (gotta say that coming back on Windsor from my lil’ century today I was all kinds of aware of potential conflicts — that somebody could clock me from behind like Sherry got clocked, or that people wouldn’t see me…  one driver went over and backe dup and the other more happily stopped *and* waved me through to show it wasn’t coincidence that he’d stopped)… but that kiddo could be out riding today if there were safe ways for him to get around… and that’s what he thought he’d be doing this summer, not… okay, we’ll stop the drama but you get my drift.

This entry was posted in Uncategorized. Bookmark the permalink.